In Wisconsin, we have a large population of Colorado Blue Spruce trees. While many of them are healthy and can add wonderful character to yards and landscaping, they do fall prey to the fungal disease Rhizosphaera Needle Cast. Let’s look at this tree disease in depth and how it’s treated here in the Milwaukee Wisconsin area.

In SE Wisconsin? Have a Pro Arborist Take a Look!

What is Rhizosphaera Needle Cast? 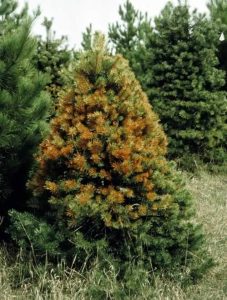 This fungal tree disease is caused by the rhizosphaera kalkhoffii fungus. As we mentioned, it affects conifer species for trees – especially the Colorado blue spruce. But it is also a threat to other conifer trees like white pines, Douglas fir, western hemlock and the Norway spruce.

In SE Wisconsin, we have primarily seen Rhizosphaera Needle Cast in the Colorado blue spruce, especially in Waukesha and Ozaukee counties. It’s a slow moving disease that leads to browning and massive shedding of pine needles.

Rhizosphaera Needle Cast spreads when infected needles and branches fall to the ground and produce spores that can be blown and spread to other healthy trees. 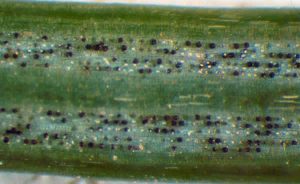 The symptoms of Rhizosphaera Needle Cast are most easily spotted in late autumn through winter and include:

The disease typically starts at the base of the tree on inner branches and works its way up as it progresses. It attacks more mature needles first. If you look closely you should see rows of small black dots coming through the needle surface. Those dots are the fungus in action. It can be hard to catch early because signs of infection may not manifest until the following year when new growth develops.

How is Rhizosphaera Needle Cast Treated?

When the weather is warm and humid, it is particularly easy for Rhizosphaera Needle Cast to spread. However, the disease can be controlled and the damage mitigated with help from an experienced professional arborist, like the tree health experts at M&M Tree Care. Until help arrives, reduce the risk of spreading the fungus by:

Treating Rhizosphaera Needle Cast should always be done by a professional arborist. At M&M Tree Care, we’ll treat the tree for the fungus over the course of two years. During the spring, we’ll spray the tree with a copper-containing fungicide designed to keep the rhizosphaera fungus from spreading. A few weeks after the initial treatment, we’ll apply a second treatment to set the tree up for success throughout the growing season.

If you see signs of disease in your spruce trees, call M&M Tree Care immediately at 414-355-3420. The sooner we can analyze the condition of your trees, the better off your trees will be. For more information on our services or to schedule an appointment, contact us today: