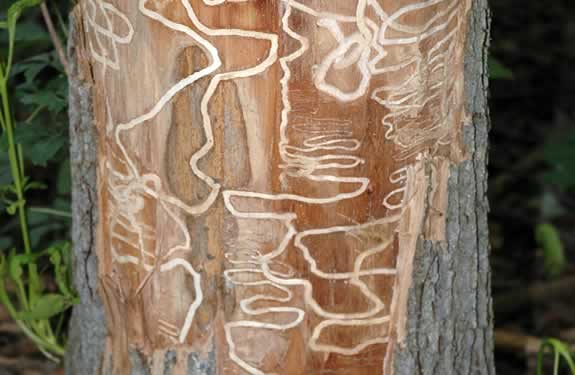 Emerald Ash Borer (Agrilus planipennisor EAB) is a tree insect that is sweeping the Milwaukee Metro area of SE Wisconsin and killing thousands of Ash Trees. It’s a relatively new pest in the Midwest and is now found throughout the Milwaukee metro area including Waukesha County, Ozaukee County and Washington County. It will severely injure and kill all Ash tree species in as little as two years if not treated before or in the early stages of an infestation.  Like with most things, prevention protocols work better and are less expensive than trying to eradicate the pest after infestation.

Get a Free Estimate

Where Did Emerald Ash Borer come from?

Emerald Ash Borer is a beetle that came from Asia.  It was identified as the cause of wide spread ash mortality in southeastern Michigan back in 2002.  The ash borer has spread so completely that in 2018, the USDA proposed to end regulatory activities intended to quarantine the borer, moving to a pest mitigation/management program instead.

How to Identify an Ash Tree

There are many trees that fall under the “Ash Tree” species. There are three traits Ash trees have that can help you quickly identify if you have one:

Emerald Ash Borers prefer green ash, white ash and black ash, but the borers will attack any true ash tree.  Mountain ash, not in the same family as the “true ash” trees, is not known as a target of the emerald ash borer.  Here is a helpful guide to determine if you have a true ash tree.

How to Identify an Emerald Ash Borer

Adult Emerald Ash Borer beetles are slender, elongate, and 7.5 to 13.5 mm long. Males are smaller than females and have fine hairs on the ventral side of the thorax that the females lack. Adults have darker, metallic emerald green wing covers and usually bronze, golden, or reddish green body. The dorsal side of the abdomen is metallic purplish red and can be seen when the wings are spread. The segment behind the head and to which the first pair of legs is attached, is slightly wider than the head and the same width as the base of the wing covers.

Larvae reach a length of 26 to 32 mm, are white to cream-colored, and dorso-ventrally flattened. The brown head is mostly retracted into the prothorax, and only the mouthparts are visible. The abdomen has 10 segments, and the last segment has a pair of brown, pincer-like appendages.

The emerald ash borer lives for about a year, with the larvae over-wintering inside pockets it has bored deeper into the trunk.  Here is a helpful guide to distinguish between emerald ash borers and other borer speciesin the US.

It is hard to tell if an ash tree is infected until there is canopy die off because the infestation starts with those larvae ravenously feeding on the soft sapwood out of range of watchful eyes (which is another reason to actively try to prevent emerald ash borer from affecting your trees).

If you see any of these symptoms, calling us immediately for a free consultation will give you the best chance to see your trees survive:

How Does Emerald Ash Borer Kill a Tree?

In the spring, adult beetles bore out of the tree to mate and snack on ash leaves for about three weeks. The adult female will lay her eggs in crevices of the bark of the ash tree and she may mate multiple times laying 30-60 eggs with some females laying as many as 200 eggs.  When the larvae hatch about 10 days later, the larvae will eat its way to the phloem or the soft sapwood of the tree.  The larvae will slowly gnaw a winding trail through the soft sapwood.

Normally it takes about four years for an ash tree to die from emerald ash borer, but sometimes it can take as little as two years.  An ash borer treated properly at first signs of infestation has a good chance of survival, but if the canopy has lost more than a third of its foliage, you are likely better off planting a new tree because it is difficult to save a tree that is so far gone.

Is Saving My Ash Tree Worth It?

Not only do ash trees provide shade and beauty to your property, preventing the spread of emerald ash borer could stop the complete annihilation of the ash tree.  Ash trees could go the way of the Dodo if we do nothing to help our trees survive.  Black ash and green ash seem particularly vulnerable of being wiped out, with white ash being given slightly better odds.  Blue ash is thought to have some of the best chances of survival against eradication at the hands of emerald ash borer, but those odds might change when the ash borer has less black and green ash to use as its host.

It is not just the work of saving a species.  When Emerald Ash Borer first broke out in Wisconsin, the city of Milwaukee mapped out every ash tree it could find in the city and treated every single one of those trees that within its control.  Very few of the treated trees died.  Other cities nearby did not treat the trees and were left with cutting down, removing, and replacing their ash trees.  Milwaukee saved a ton of money compared to the surrounding communities because preventing the infestation was several times cheaper than removing and replacing dead trees.

How to control EAB?

Along with other tree care services, chemical treatments are needed to stop this pest in its tracks.  The best treatment for EAB is to apply a pesticide at the roots or directly into the tree at the base which will be absorbed into the tree and kill insects while they are trying to eat the tree. The pesticide is perfectly safe for the tree it will ONLY affect insects that are eating your tree.

One treatment from M&M Tree Care is good for two years and EAB treatment is up to 95% effective! Our certified Arborists have extensive experience identifying and treating EAB. The active chemical we use is called Emamectin Benzoate, which, unlike some other insecticides, is effective during all larval stages and can kill the larvae in just a few bites.  Another advantage of the chemical we choose is that it can be applied from spring to late summer, while most others can only be applied during the spring. Common trade names are Tree-age and Arbormectin. Treatment is a direct injection into the trunk of the tree. An organic root stimulant will improve the health of the Ash root system as well and should be applied during the off year of the two-year trunk treatment.

Emerald Ash Borer Treatment: How to Save Your WI Trees

How to Stay Ahead of Emerald Ash Borer in SE Wisconsin

Get a Free Estimate on Emerald Ash Borer Treatment

Call 414-355-3420 or contact us online with questions or to get a free estimate on Emerald Ash Borer treatment for your trees.