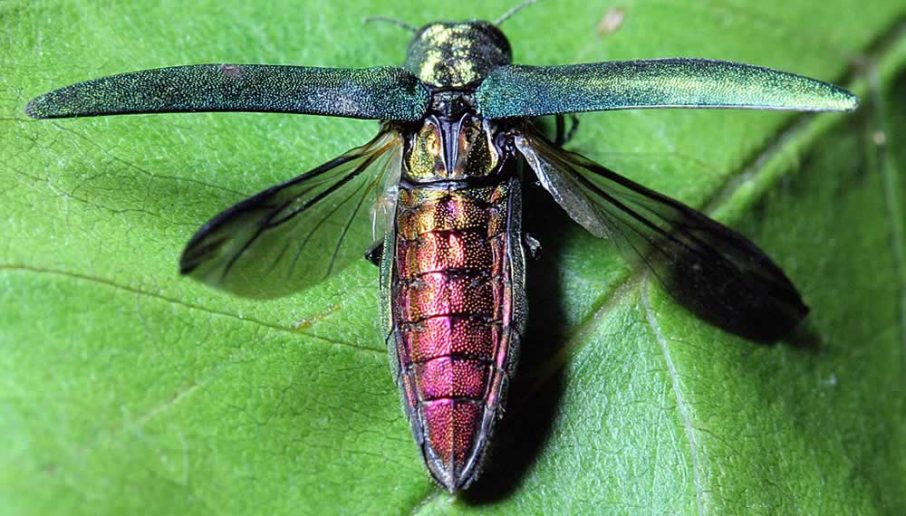 It is usually easier and less expensive to help a tree with one of these common tree diseases early, so be sure you act fast.  We will tell you more how southeastern Wisconsin tree owners can get a free evaluation of their trees by a certified arborist toward the bottom of the page.

Even if your tree is looking pretty bad, intervention is usually cheaper than cutting down and replacing your tree, and you can never really replace an old tree.  If you are not sure whether or not it is worth trying to treat your treat, be sure to check with your local arborist about whether he or she feels your tree can be saved.

Anthracnose is a disease from a family of fungi that cause sunken dark lesions or cankers on leaves, stems, flowers, and fruits of trees and shrubs.  Anthracnose actually means “ulcer-like sore,” and that is why it describes a family of fungal infections because it is based on the symptom rather than the specific fungus.  It has no relation to the similarly named anthrax and poses no harm to people.  The type of fungus is often specific to the tree infected.

It most commonly infects sycamore, ash, oak, and evergreen elms trees. Anthracnose fungi need water in order to spread and infect so you will find it all over Wisconsin and other Midwestern states, but you won’t find it in the deserts of Arizona.  You will often see the infection in leaves follow the veins in the leaf leading to leaf die-off.

Cedar Apple Rust is a fungal infection that could harm your apple trees if left untreated. It is actually from several fungi in the genus Gymnosporangium. It is a unique disease because it needs two host plants to complete its life cycle, both cedar and apple trees.

You can read more about Cedar Apple Rust on our blog post about it.

Downy spot, also known as white mold, is often first noticed as yellow spots on the leaves concentrated by the veins.  As leaves get to their full size in spring, downy spot will reveal itself as white powdery patches on the underside of the leaves.  Lesions will appear on the leaves and then the leaves will turn brown and dry.

Downy spot is another fungus and can be treated by fungicide and pruning if necessary.

Emerald Ash Borer is a small, emerald colored beetle that bores into ash trees to lay its eggs.  When the eggs hatch, the larvae bore around the area between the bark and main part of the trunk where important cells for transporting water and nutrients reside.  When ash borers create enough damage, the tree cannot transport nutrients to the top and the tree dies.

Gypsy moths have been in the United States since 1889 and it came to Wisconsin somewhere in the late 1980’s.  Gypsy moths feed on hundreds of different species of trees and shrubs which sets them apart from many other invaders which usually limit themselves to only a few different types of trees.  Also unique to the gypsy moth is that you will see an outbreak and population explosion about once a decade.

Gypsy moth is a destructive insect that is native to Europe, Asia and North Africa. It was introduced in North America in 1889 and has been spreading West ever since its arrival. It reached Wisconsin in the late 1980s and their natural populations can explode to very high numbers. Outbreaks like this occur about every 10 years or so. Gypsy moths feed on about 500 different species of trees and shrubs. Many counties participate in an annual gypsy moth suppression program to keep potential defoliation to a minimum.

The eastern half of the state is considered a quarantine area meant to limit the transport of potentially infected wood, wood products, and outdoor items.  You are supposed to have items inspected for gypsy mouth egg masses before transporting them outside of the quarantine area.  Wisconsin has an aerial spraying program in many western counties of the state to help protect the state’s forests and to keep the moth from spreading west.

If you have gypsy mouths, they can easily be eliminated with certain pesticides.  If left untreated, trees can be significantly damaged by the gypsy moth caterpillars.

First seen in New Jersey in 1916, the Japanese beetles have shown themselves voracious that will eat a wide variety of plants such as grass, milk weed, and trees.  These beetles can be found in most states east of the Mississippi River.

Japanese beetles only live a year and much of that time as a grub living underground.  Adults are most active from June to August.  If you are in southeastern Wisconsin, you probably already know there are heavy populations of this pest in the area, and you have to act quickly with a pesticide when found because they like to congregate together on plants and they can quickly do a lot of damage.

There are three different fungi that are the primary cause of leaf spots in trees.  Those fungi are cylindrosporium, phyllosticta, and Septoria.

They create round spots on the leaves causing yellowing, leaf lass, and sometimes small black structures embedded in leaves. A wide variety of trees are susceptible to these infections.  Usually an anti-fungal treatment is required to liberate the tree from a fungal infection.

Dothistroma pini needle blight was first found in Illinois in 1941.  It is not surprise it quickly spread to Wisconsin, even though it is not as serious an invader in Wisconsin as it is in warmer climates.

Generally infecting needles that are one to three years old, it shows itself by the needles turning brown, usually starting at the tips.  Needle blight can be treated with fungicide, but be sure to check with an expert before treatment because other things can cause similar symptoms.

Rhizosphaera needle cast is another fungal disease similar to needle blight that causes needles to turn brown and die off.  You can read our in-depth article on rhizosphaera needle cast.  Needle cast primarily attacks pines and spruces with the Colorado Blue Spruce the tree we most commonly see infected in southeastern Wisconsin.

Like other fungal infections, fungicides can be effective in saving your trees, but be sure to know which specific fungus or other problem you have.

Another fungal infection, oak wilt red and white oaks.  Oak wilt is very dangerous to our oaks because it gets in the way of a tree’s ability to move water up to and through the canopy of the tree which means the leaves don’t get enough water to survive.

If you have a tree infected with oak wilt, all of your other trees are in extreme danger of getting oak wilt as well because the fungus quickly spread from the roots of an infected tree to the roots of healthy trees.  Just cutting down an infected tree without proper care can make the situation worse as the fungus looks for a new host when the previous host is cut down.  Oak will can also be spread through beetles moving from one tree to another and if there are infected trees nearby, you may want to avoid pruning or trimming your red or white oaks when temperatures hit above 50 degrees through till the end of July.

Oak wilt can be treated with fungicides and root graft barriers to prevent the spread to healthy trees.  Like all other infections, the faster you act, the better the chances your trees have for survival.